Thanks to MyNameIsUrl,6Tricia,staffordian,Anonymous,Sussexlad, for Donating to support the site

A Case of Electrical Work of a Questionable Standard

A Case of Electrical Work of a Questionable Standard

A friend of mine owns a flat that he lets out. Five years ago, he had the consumer units replaced with nice metal ones — one for the storage heaters and a dual-rcd one for everything-else. The cooker and shower were fed via one rcd, and all other circuits from that consumer unit were fed via the other rcd.

A couple of months ago, prior to a new tenant moving in, a different—erm—"electrician" visited the property, did some work and issued an EICR. He (I was told) replaced both rcds and spent over an hour working on the consumer unit.

The new tenant moved in and reported that the rcd tripped whenever the shower was switched on. There were also issues with the oven and hob. This is what was found:

For clarity, only the relevant neutral and earth connections have been shown, and the cooker switch has been omitted. 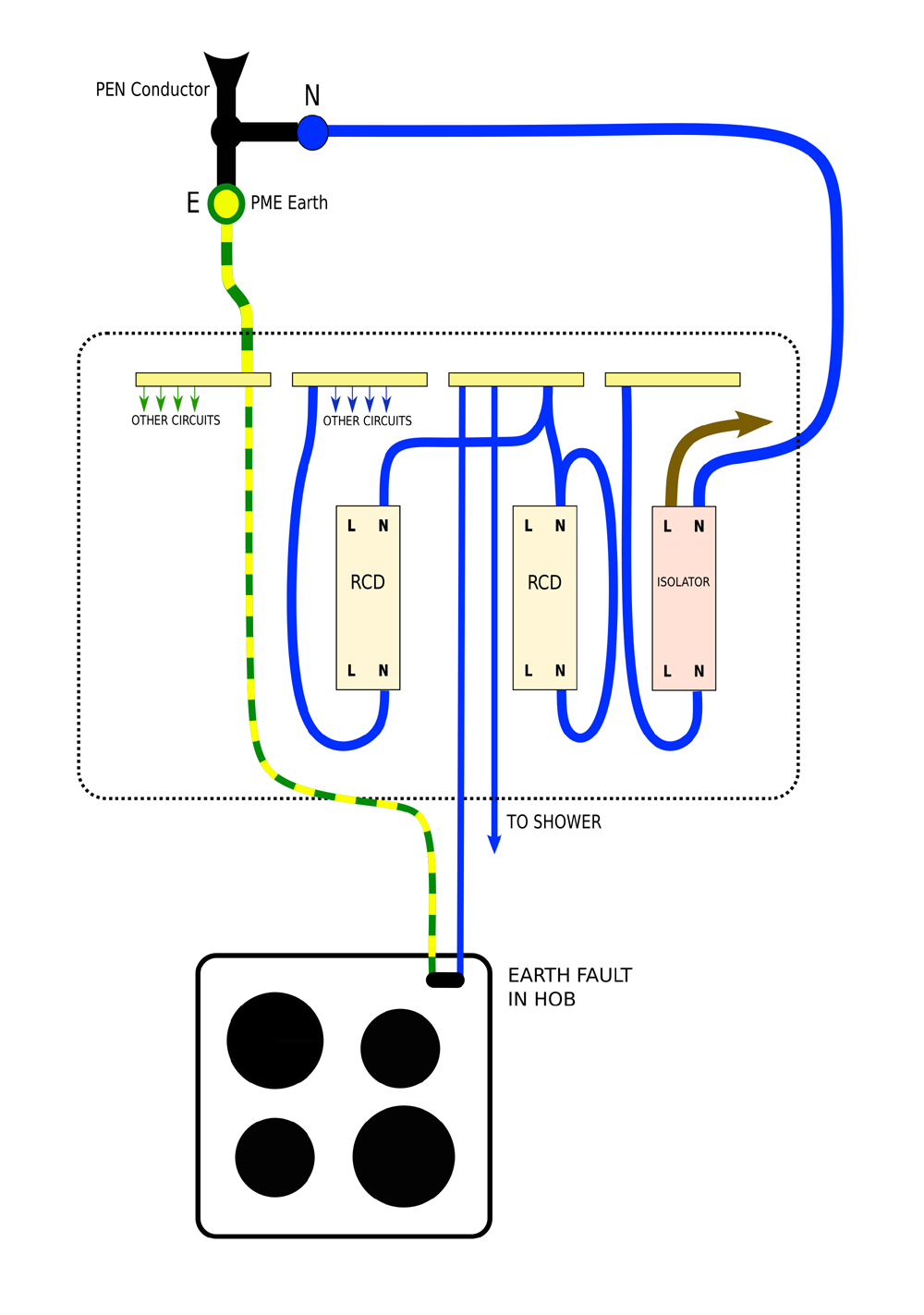 You will see that the neutral from the isolator was not connected to any of the circuits.
There was a dead short between the neutral and earth in the hob caused by an overheated terminal melting the plastic terminal block and coming to rest on the metal casing.
The neutral supplies for all of the circuits within this consumer unit were via the 2.5mm² earth core within the cooker circuit cable. This includes the immersion heater and socket circuits. It also includes the oven which, I understand, could be used without tripping the rcd. (The fact that one of the coils was shorted may explain this.)

Please respect TLF's "no swearing" rule when replying to this post.

My guess is that this was intentional.
The "electrician" found that the RCDs would trip with normal connection indicating that there was a fault (measured as a difference between the live/neural current flow by the RCD). The solution would be either to find the neutral-earth fault path, or to feed all neutral connections via the earth hence balancing the RCD and removing the trip. A lot less time and bother but very dangerous given UK wiring.

Edit :- Some continental wiring standards used to float both live and neutral, making the fault voltage less lethal and may have allowed something similar. Was the electrician a local ?
Top

Finding the neutral-earth fault path was not exactly difficult in this instance! Pinpointing it required disconnecting the hob—not a difficult task.

I do not know his nationality and, as far as I know, he was born in the UK. His name seems to be most common in Saudi Arabia and his forename is Islamic.

PhaseThree wrote:Edit :- Some continental wiring standards used to float both live and neutral, making the fault voltage less lethal and may have allowed something similar.

Hopefully, there was some means of fault detection otherwise that seems downright dangerous. A single earth fault would create a neutral (pot luck which wire it was on). Two earth faults in separate premises could create a "short" of high enough impedance that it might not trip anything. Even the 110V isolating transformers used on building sites are centre-tapped.

Well I am glad to see that the RCD tripped and alerted the to occupant to the miswiring of their electrical installation. Fix the fault and wire it up as nature intended is my advice. Also, I find all these split-load RCD solutions are rather shitty and don't actually conform to the wiring regs in the sense that one circuit protective device tripping shouldn't effect other final circuits. In my opinion the only professional way to do it is to organise residual and over overcurrent protection independently for each final circuit.

csearle wrote:Fix the fault and wire it up as nature intended is my advice.

The hob was disconnected and the consumer unit rewired straight away. A very nice new Bosch hob has been fitted to replace the old Neff one that was installed when the building was converted into flats in 1989.

csearle wrote:Also, I find all these split-load RCD solutions are rather shitty and don't actually conform to the wiring regs in the sense that one circuit protective device tripping shouldn't effect other final circuits.

You will be much more familiar with the regs than I. I would certainly question whether putting the sockets and the lights on the same rcd is compliant as, if this one trips (and the fault cannot be cleared easily), the only mains lighting is the one in the oven and a table lamp plugged into the socket on the cooker switch.

Return to “Building and DIY”