Thanks to MrFahrenheit,SalvorHardin,Anonymous,johnhemming,Anonymous, for Donating to support the site

Thanks for the two replies.

1nvest wrote:£1 invested in stock accumulation at the start of 1972 would have been £180 value at the end of 2019 [etc]…
…Can TA improve upon just simple yearly rebalancing, which after all is a 'trading plan', albeit the most simplest? I suspect not as both stocks and gold prices are volatile and often surprise.

I agree, Invest. But then it never occurred to me in 1972 to buy gold (which I couldn’t afford) and carry out such a strategy. I’m talking about my reality. At an advanced age I take an interest in gold (and silver) as some time ago recorded on TMF and see no harm in devoting a small part of my modest investments to the very occasional deal.

My guess is the gold price will only fall once stocks take off again. I think the rebound was because feel good due to beating the first wave, plus growth in big tech doing the heavy lifting, compounded (in my opinion) by mega hyped up stocks like Tesla and Shopify

I think stocks will go sideways and only get bullish again when there is a workable vaccine and everyone who wants has been vaccinated (end of the year?) or Covid miraculously almost-disappears like Swine flu (herd immunity?). That could be some time, hence party time for gold right now.

Interesting, Adamski, that you think that it’s right to hold gold and presumably too soon to think about taking a profit.

Gold does tend to be inversely correlated with the US$, whilst stocks tend to be correlated to the US$. The cycles are long, for instance for a UK investor holding 50/50 US stock and gold as a form of domestic currency hedge perhaps, then from the start of 1980 to end of 1999 the price of gold declined 25% in nominal terms, however 50/50 yearly rebalanced saw 6.5 times more ounces of gold being held at the end of 1999 compared to at the start of 1980. Since the noughties (2000 onward) the cycle has swung somewhat around, where ounces of gold are being reduced to accumulate more stock shares.

The somewhat multi year inverse correlation isn't consistent however, there are sequences of years where both moved broadly in parallel in the same (up or down) direction.

If you assume that gold prices will tend to rise as investors fear increases and money flights to the US$ and/or if real yields turn/move negative, then the dowside for both stock and gold could be where inflation rises, nominal yields rise to above inflation (positive real yields, gold prices down), but where the economy/stocks gains/rewards remain subdued, resulting in something like the following outcomes 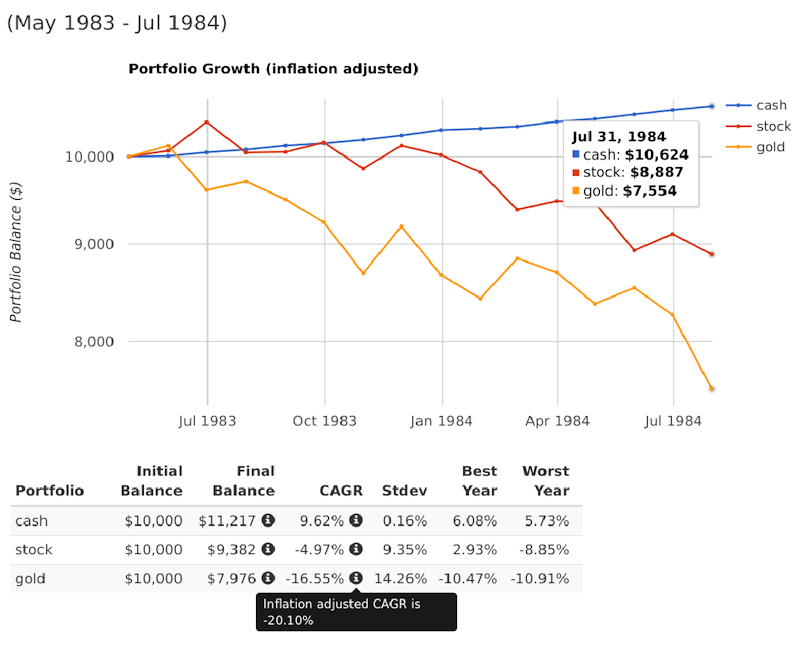 Recent valuations/events does feel like it might be pent up for something like that to occur. As/when inflation does show through and deflation is avoided, so central banks may be more inclined to have interest rates set to above inflation, but inducing each of stock, gold and bonds all taking a hit as a result. As much as low nominal/negative real yields on cash (1 year Gilt/Cash Deposits) are painful, the cash purchase power of stocks, gold and bonds could spike upwards.
Top

Blue line is actual. Red line is my projecting the continuation of the recent trend 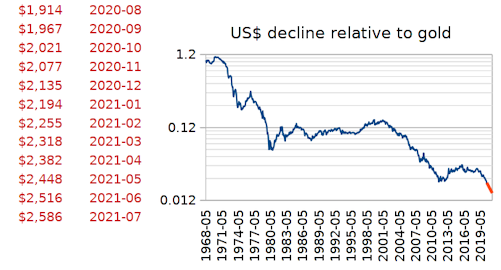 Gold hitting new highs again over the uncertain economic outlook. Seemed to have broken through resistance point about 20 july, so having a good couple of weeks.

Users browsing this forum: No registered users and 2 guests