Thanks to Rhyd6,johnstevens77,Anonymous,MyNameIsUrl,6Tricia, for Donating to support the site

Own a home, so no rent to find/pay and the value might serve as late life care fees cover.

No stamp duty.
No fund fees.
No interest/dividends (so no US dividend withholding taxes)
Simpler yearly self assessment reporting

Review yearly at around the end of the financial year (end of March/Early April) and rebalance in the old, new or a combination of both according to whichever might be the more tax efficient.

If your home value is around a third of total wealth, then the historic imputed rent proportioned to around 1.4% (4.2% historic). Draw 2% SWR (2% of total initial value, uplifted by inflation each year, which proportioned to the total value including home = 3% relative to just the stock/gold value). Combined 3.4% benefit (of which 1.4% is in effect being spent on 'rent'). Likely that would be a PWR ... perpetual.

On a more serious note BRK has underperformed the S&P500 over the last decade (plot it against CSP1). I haven't done any work to see if that would be the case if tech was stripped out but suspect it wouldn't be. As evidence I suggest looking at BRKB versus SWDA where BRKB is noisier but very similar to the MSCI World trackers return (currently ahead). Now I have only done a quick compare and did this on Hargreaves Lansdown which is not always reliable (I suspect for shares it doesn't reinvest dividends but that shouldn't be an issue here).

I suggest modelling the two indices mentioned above with gold and comparing returns. They won't give all the benefits you suggested but they will show you what the economic cost of simplifying tax returns is. Probably not a lot is my guess. I reckon the biggest negative here is single stock concentration risk including the risks from change of leadership. Well done.

There is also an argument that this may give a portfolio that is less exposed to a change of market leadership say in a down turn. I seam to remember Berkshire Hathaway going from dog share to hero after the dot com bubble burst.
Top

1nvest wrote:Own a home, so no rent to find/pay and the value might serve as late life care fees cover.

Is that how you personally invest and are showing the results since 1987?
Top

Here is an interesting article about gold as an investment:

Gold is not for me!
Top

GeoffF100 wrote:Here is an interesting article about gold as an investment:

Gold is not for me!

Thanks for the link Geoff.

I didn’t think this was a fair and balanced article.

For instance the period of US outlawing holding/trading gold from the 1930's to 1970's didn't apply to the UK, and US investors could have opted for silver instead to similar effect. Also when pegged, money convertible at a fixed rate for a century, the obvious choice would be to have held money deposited into Treasury Bills/whatever to earn interest such that later that bought back more ounces of gold ... similar to the state paying you for it to securely store your gold.

Rebase the 1970's start date chosen in that article to 1960 and 50/50 stock/gold compared in total return to all-stock whilst doing so with less volatility (better risk adjusted rewards). Mid/late 1970's onward backtest data selection being bad for gold is the same common choice for highlighting how great stocks historic stock performance has been i.e. very selective. The transition to relatively high yields and basing to that spike as a start date naturally resulted in a subsequent general decline in yields/rising prices - being great for stocks and bonds.

Bonds such as lending to Kings used to be very productive (provided not defaulted), of the order 8% real. No more, indeed nowadays investors in effect pay to lend.

Stocks are more often backtested against the discovered best mechanical selection methods that only apply to backtests, weren't known across the period backtested such that other less rewarding choices were more commonly held such as the FT30 stock index type sets. Backtests more often also exclude taxes that at times were very punitive against income streams such as interest/dividends. 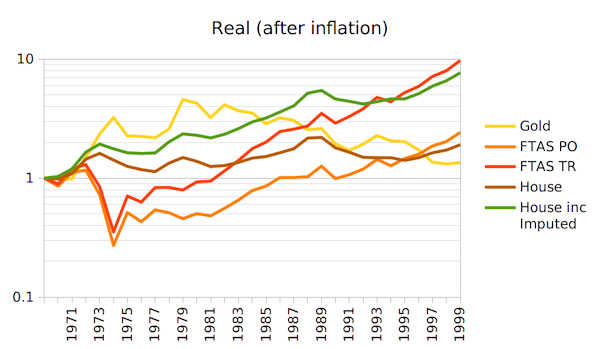 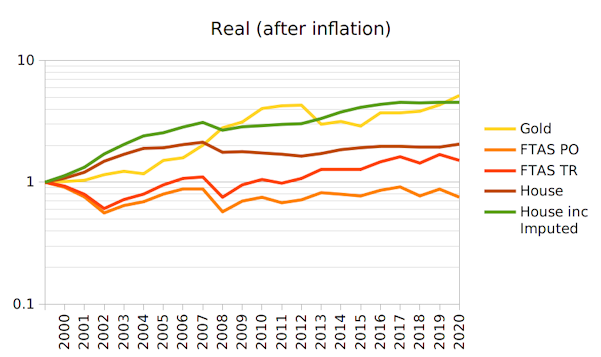 A reality is that most private investors lagged historic S&P500 style stock index rewards even in gross costless terms by around 2% annualised because those 'better' index methods weren't known in advance. Factor in historic costs/taxes and many investors would have been better off had they simply deposited their money into cash deposit accounts. Many families prior to the 1980's held no stock investments, preferring instead buying a house/home, gold, cash deposit type choices instead, not without good reasons. To expect stocks to continue to reward what they have since the mid 1970's bust, a subsequent great time for stocks/bonds, is simply misguided. That misguiding is funded by big money, the worlds largest/richest sector i.e. financials.

Those that take the time/effort to apply due diligence might observe that over the longer term when a more neutral/balanced review is applied that all stock is not the great panacea that many suggest stocks to be and that alternatives such as a third each in land (home), stock and gold ... with caveats applied (such as holding silver instead in the US when gold was outlawed, and T-Bills interest in pre 1932 (1934 US) when money was pegged to gold ...etc.) and total return rewards were very similar, but where the greater diversity reduced 'risk' (volatility) i.e. better risk adjusted rewards. And that's before other risk considerations, such as physical in-hand asset qualities that generates no regular income stream. Let alone more extreme situations such as slipping a guard ten 1 ounce gold coins to get you and your family through a gate and onto a plane to escape a regime or suchlike.

One friendly but sharp-eyed commentator on Berkshire has
pointed out that our book value at the end of 1964 would have
bought about one-half ounce of gold and, fifteen years later,
after we have plowed back all earnings along with much blood,
sweat and tears, the book value produced will buy about the same
half ounce. A similar comparison could be drawn with Middle
Eastern oil. The rub has been that government has been
exceptionally able in printing money and creating promises, but
is unable to print gold or create oil.

Buffett hates gold, but at times has bought millions of ounces of silver. Substituting silver instead of gold historically as part of a portfolio has tended to yield similar broader reward outcomes.

But at the end of the day each investor has their own preferences. Gold for whatever reasons induces more extreme debates and often vilification. Many that include gold in their portfolio simply remain silent as more often upon asking a question there's a stream of negativity about the asset rather than more reasoned discussion of the question.
Top

1nvest wrote:Own a home, so no rent to find/pay and the value might serve as late life care fees cover.

Is that how you personally invest and are showing the results since 1987?

50% of liquid assets in BRK even though a conglomerate would still be excessive single stock risk so I include only part BRK exposure. FT250 being another, otherwise somewhat HYP1 like style (buy and hold no tweaking) but not with dividends/income in mind (total return focus).

I don't trust historic index average performance figures, opine that they're distortions, instead preferring real world data that investors might have selected/held. LEXCX (US) is one such example that bought 30 stocks back in the mid 1930's, held as-is since. 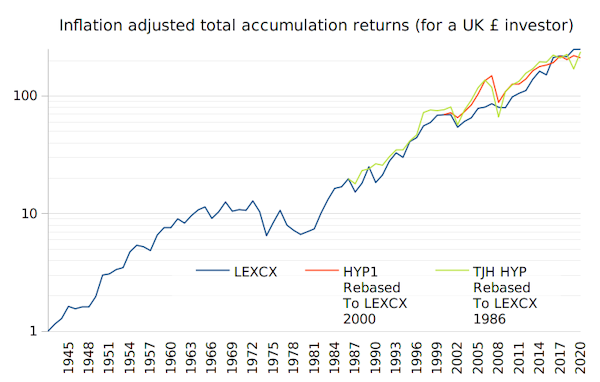 A factor for me is that being in drawdown/retirement now, the likes of the early/mid 1960's to early/mid 1980's is a risk factor, where sideways 0% real type total returns whilst also drawing a income, no matter how that income might be provided, would be eating capital, that subject to the withdrawal rate/amount over a 20 year type period could deplete the portfolio value down to critically low levels. Diversifying across land (owning a home) and some gold smoothed down/out that stock risk.

BTW the HYP1 and TJH lines in the above chart are total return based figures, as is the LEXCX also a total return (dividends reinvested) benchmark. 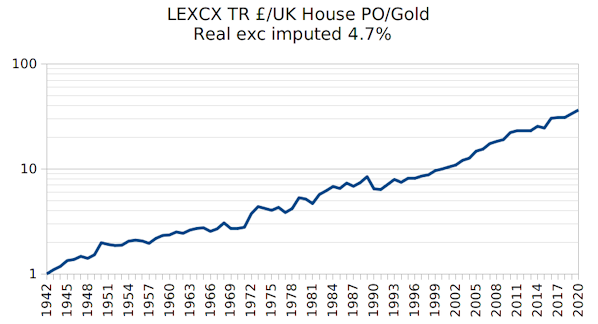