Thanks to bruncher,mark88man,stirlo,johnstevens77,Rhyd6, for Donating to support the site

A helpful place to also put any annual reports etc, of your own portfolios
Post Reply Previous topicNext topic
25 posts

The £ has tended to devalue relative to the US$ over time. In turn the $ has devalued relative to gold 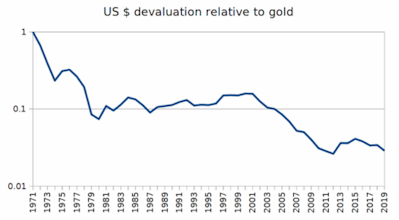 ... at around a 7%/year rate (9% for £). If a one ounce gold coin would buy a Roman soldier a good suit, as might a one ounce gold coin do so nowadays i.e. many proclaim that gold isn't a good investment as it might just pace 'inflation' (and in a very volatile manner), they might be looking at the wrong inflation rate and the wrong currency when making that assumption.

That devaluation is intentional and as such the decline is inclined to continue, albeit in a sporadic manner. Money stuffed into a mattress remains idle. Induce inflation and savers have to deposit/invest in order to offset otherwise inflationary erosion of that monies value. States fear deflation, as then that slows activity/money flow, as people hold off buying (cheaper tomorrow than today), or don't invest their money but instead leave it stuffed into a mattress.

Print enough money and inflation will sooner or later arise, as each new note created and spent lowers the value of all other notes in circulation. Trouble is that can turn around in a large/fast way, and see a rapid rise, despite the good intent to achieve a slow/progressive rise. If interest rates aren't raised above inflation then real yields can move even more negative. 10% inflation, 5% interest rates and -5% real yields would tend to see gold spike heavily in price. Present seemingly high gold prices could rise a lot higher. But equally if current negative real yields move slowly more positive, then gold will falter, stocks however will tend to to well.
Top

If you consider 75% Vanguard LifeStrategy 40 along with 25% gold to be a global PP, and compare that to a domestic PP (as Harry Browne advocated) using the FT250 for UK stocks, then since 2012 (including a 50/50 of both) 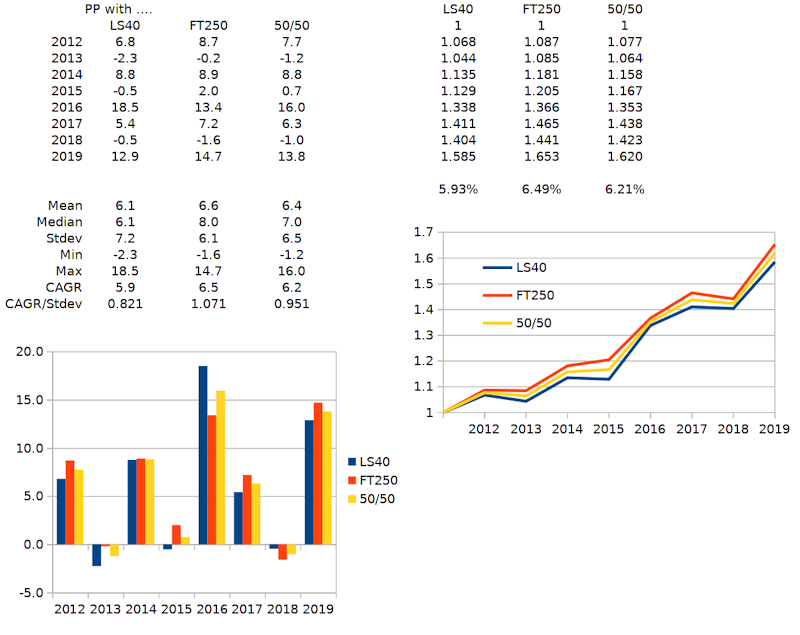 I have noticed that a UK and US PP's have both provided similar % rewards over recent years, but given that the US$ had risen relative to the £, a UK investor holding a US PP would have done better in having the currency gain benefits also added in on top. That could however swing around the other way, after Brexit for instance the Pound might rebound relative to the US$.

Adamski wrote:I do like this lazy portfolio approach. There's lot to be said for it. Smooths volatility and easier to sleep at night. Also think having gold in a portfolio allocation is a must with bond yields so low.

Using the FT250 Blackrock (iShares) as outlined by Paul here viewtopic.php?p=54286#p54286 that accumulates dividends, and with Gilt interest being paid into the 'cash' bucket, a PP started in 2015 with the intent to rebalance upon hitting a 20% lower or 30% upper weighting rebalance bands trigger levels (i.e. 25% target weight +/- 5% rebalance bands)... wouldn't have hit such a trigger level in the years since 2015, leaving mostly just the 'cash' element as the holding requiring action/activity. 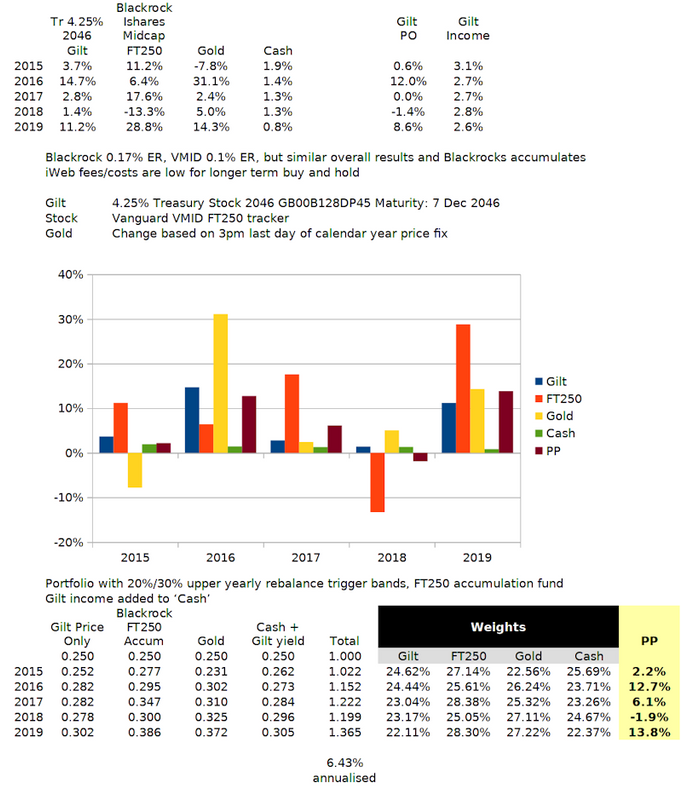 Just coming to this thread having looked for any info / views on the golden butterfly portfolio
If anyone is using / there is any feedback on the tests it would great to hear that.
Thank you
Top