Thanks to Rhyd6,johnstevens77,Anonymous,MyNameIsUrl,6Tricia, for Donating to support the site

Fiat money, the next few years.

Central banks will continue to prop up capitalism.

BoE printing enough to buy up all older higher cost-to-service Gilts (say £500Bn costing (paying) 5% as per 2008 levels), for the Treasury to sell twice as much paying half the interest rate ... is just a debt restructuring. Costs no more to service now than in 2008 (given around 35% inflation since then), but where the debt is large - but where the BoE holds around a third of it, and returns all interest received, back to the treasury. And where the debt is extended out over decades.

With such big buyers in the market (other countries have done similar), bond prices have soared, yields declined. So pension funds end up reducing out of bonds to buy more stocks (as part of rebalancing back to 50/50 or whatever target weightings). Pushing stock prices higher.

The larger concern is deficit, not debt. Living within means. Debt size will be a factor however when each Gilt matures - when the choices are to either repay in full (if the economy is doing well and there's a surplus), or rolling the Gilt into another 20 year or whatever new issue. If yields at that time are high and there's no surplus such that Gilts have to be rolled then that could be a high cost factor, but that risk is diversified across many decades, so will likely wash. And all the time, existing high debt but low cost to service costs is more likely to see the debt being eroded by inflation.

For those that align in such policy, US, UK, Euro ..etc. then broadly there might be no (low) inflation, for those that don't, then the relative decline in £/$/Euro will see price inflation in those currencies, making those that didn't deflate their currency becoming less competitive. The Swiss ended their Franc coupling to gold back in 2000 for those types of reasoning. Central Banks have also recently (March 2019) opted to re-promote gold back to being a Tier 1 asset (and gold has gained around 50% in price since).

Yes there is a tendency towards stuff costing more in £'s or $'s due to such monetary policies. Priced in bonds or stocks or gold and stuff may cost less. I guess to buy the latest Apple MAC in the mid 1990's might have cost around 1000 Apple shares, but more recently cost perhaps 100 shares. Or cost more in ounces of gold in the mid 1990's compared to recent. If your portfolio is diversified, perhaps £'s invested in bonds, US$'s invested in US stocks, and gold, then you can opt for whichever of those 'currencies' to buy stuff with at any one time (including some of those other assets for when they might in turn become the 'higher value' asset). Likely the historic volatility of 'currencies' will at times swing between highs and lows. Historically for instance at times its taken just 70 ounces of gold to buy the average UK house, at other times its taken 700 ounces. Or at times you could near buy the Dow with just a little over once ounce of gold, at other times its taken more than 40 ounces. 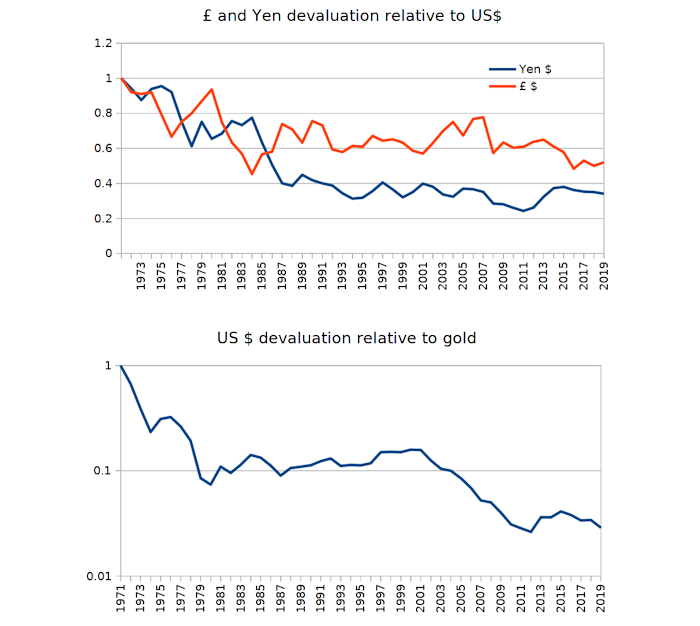 The original mid 700's Pound was a pound weight of silver value. More recently it takes something like 150 Pounds to buy a pound of silver (but the global population was much smaller back then). Much of that inflation has occurred within the last century, primarily since the ending of the gold standard. When on the gold standard inflation broadly averaged 0%, but did at times see spikes either side of that. A primary cause is the US, who said they'e behave responsibly (but haven't) as part of the ending of the gold standard to instead adopt the US$ as the primary reserve currency. Given such US contempt others are looking to address that issue and instead adopt another choice, diversified, including multiple currencies and other assets such as gold - but the US is resisting that as much as it can - but that doesn't take much effort as both the Euro and Chinese currencies as contenders are pretty much basket cases from a capitalist perspective.
Top

The fly in the ointment is debt. Pure and simple. There is debt for growth and debt for sloth. Currency is merely a function of facilitating a transfer of value. Increasing the supply of money is simply the other side of the double entry of debt. Those who dismiss it out of hand conform to the can kicking down the road club! Right now, broadly speaking, we have a unilateral policy of money printing among the major economies, but for how long? It's all very cosy and convenient until one or more entities decide to break ranks and leave the party. Answers on a post card....
Top

Yes indeed which is of course why politicians have consistently and conveniently used Fiscal Taxation as the electoral bargaining carrot, knowing full well that the policy of mickey mouse money printing is all part of the inflationary stealth tax plan. Meanwhile, they toss candy to the mob as part of the appeasement policy of encouraging the trend in dumbing down.
Top
Post Reply Previous topicNext topic
24 posts

Return to “The Economy”

Users browsing this forum: No registered users and 2 guests